The intrinsic parameters of a camera encompass the focal length, pixel dimensions, the principal point (where the optical axis intersects with the image plane) and finally, the subject of this post, the skew between the axes of the image plane. These parameters are collected into a matrix called the calibration matrix $K$. This calibration matrix is a $3 \times 3$ affine transformation between two 2D spaces (two planes) that gives a way to measure the direction of the ray back-projected from an image point.1

Usually, the skew coefficient is simply represented as a constant like s and details of how it came about are omitted. To understand why this is so, you might want to skip ahead to the section Should you care about axis skew?). This post aims to discuss in detail, the contribution of the axis skew to the calibration matrix of a camera. To keep the post focused, I assume knowledge of how the other parameters are accounted for in the matrix. The discussion takes the form of a formal solution to a problem in the book “Computer Vision, A Modern Approach”, but I hope that it is self-contained enough to be useful without the book too.

Note that $Norm$ and $Skew$ share the bottom left corner by construction. 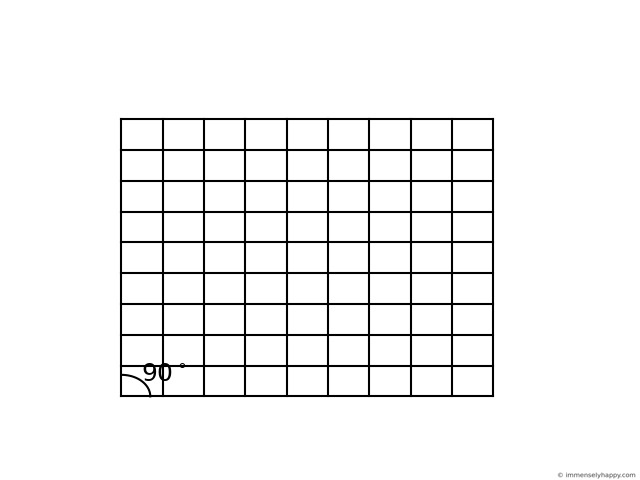 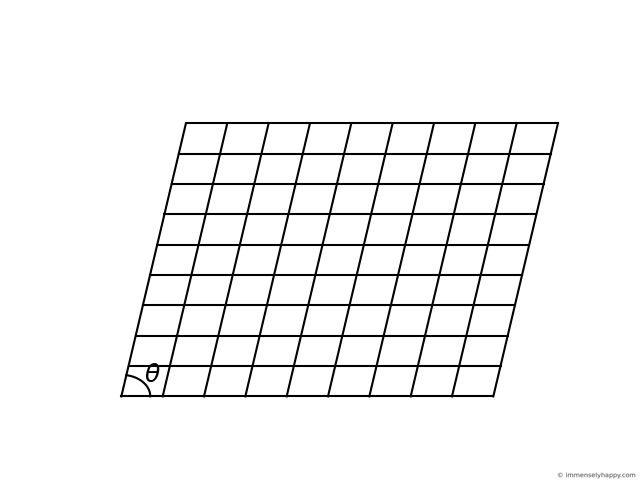 Exercise 1.6 then can be rephrased in the following manner.

I always find that rephrasing a problem in multiple ways helps clarify the question further. So, yet another way of rephrasing the problem is as follows.

The crux of the solution is that the problem has two parts.

Secondly, we have not yet defined the relationship between the skewed pixel grid and the normalized image plane grid. How exactly did I generate the picture of the skewed image grid you might ask? Good question. It turns out that there are multiple ways to transform the skewed pixel grid to a normalized grid with axes perpendicular to each other. This took quite some time to sink into my head and would have saved my head and the wall quite a bit of bother if the authors had mentioned upfront which transformation they were using. I say this because almost everyone else (Matlab3, other books4 5) uses a different transform and hence ends up with an equation that is different from Eq. (1.13) and thus a different calibration matrix!

Finally, using the skewed frame coordinates we obtain in the first part together with the pixel dimensions we obtain based on the transformation we chose in the second part, we can find the pixel coordinates on the skewed grid, thus deriving Eq. (1.13).

1. Finding image coordinates of a point in the skewed frame.

The coordinates of a point in a given coordinate frame is simply a linear combination of the frame axes. This means that the point can be represented as a weighted sum of $n$ axis vectors of the frame. In this case, we only have 2 axes as the point lies on the 2D image plane. 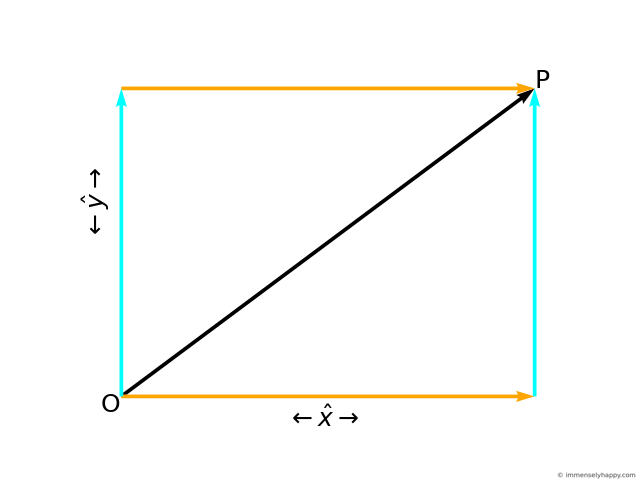 Superimposing both these coordinate frames so that their origins coincide, we can use geometry and trigonometry to find the length of the edges of the parallelogram in frame $Skew$ (in blue and red) in terms of the coordinates of the point in frame $Norm$ (in cyan and orange). 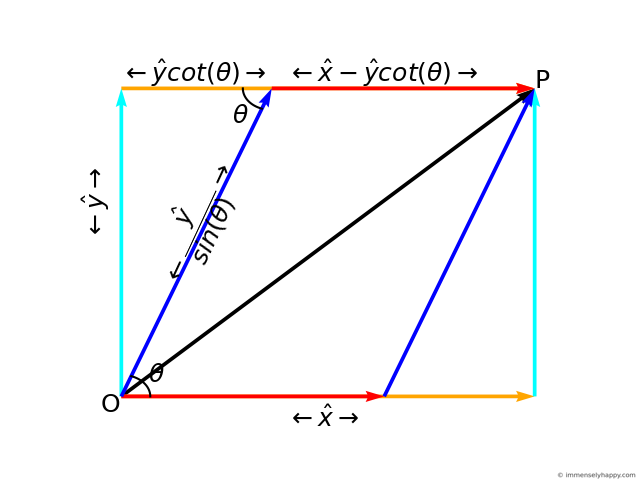 As you can see

and the new skewed basis being

A hint as to what transform could be in play is in the use of the word “skew” to represent the state of the pixel grid whose axes are not quite perpendicular to each other. Skew is a synonym for shear and we know that the shear transform can be represented as

This is what a sheared grid (in blue) corresponding to the normalized image grid (in black) looks like. 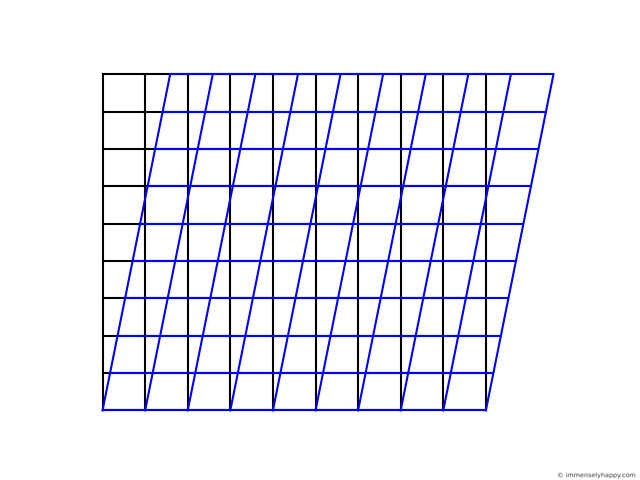 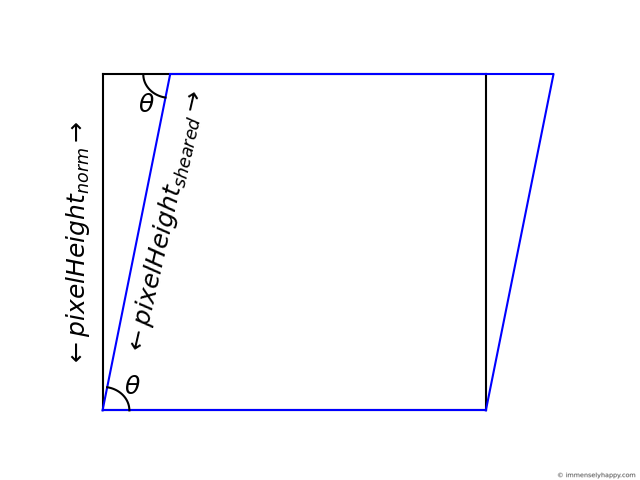 What if I don’t want the pixel dimensions and hence $\beta$ to change? The following matrix produces a “skew” without changing the dimensions of the pixel. I got this matrix by drawing out the normalized pixel and skewed pixel with the same width and height, then using trigonometry to derive the relationship between their x and y coordinates. $$T_{skew} = \begin{pmatrix}1 & cos(\theta)\\ 0 & sin(\theta)\end{pmatrix}$$ 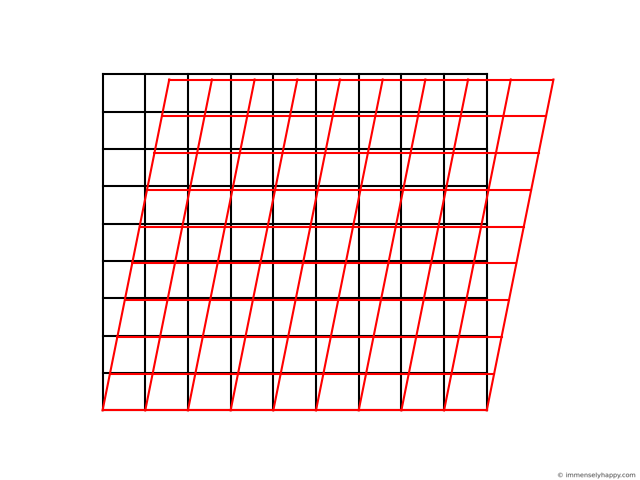 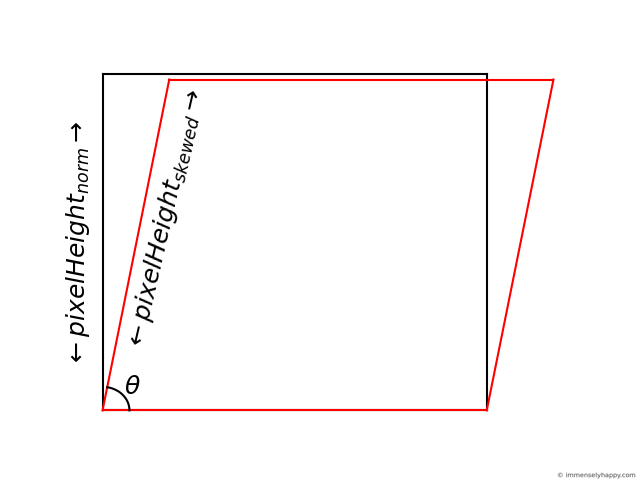 Which is the correct transformation though? For this proof the appropriate transformation is $T_{skew}$, the one that preserves pixel dimensions. However, the answer in general is either/both. The normalized image plane is whatever you make it to be as long as its axes are perpendicular to each other and its left bottom aligns with the actual pixel grid. If you want to use the shear transform you would have to adjust the Eq. (1.13) (as we will discuss later).

3. Finding pixel coordinates of a point in the skewed frame.

Replacing $x_{skew}$ and $y_{skew}$ with their values in terms of the normalized image plane coordinates, we get

where $x$ and $y$ are pixel coordinates of the image point in the skewed coordinate frame. This is the same as Eq. (1.13).

Pixel coordinates with the shear transform

When we use a shear transform to convert the normalized pixel grid to the skewed one, Eq. (1.13) becomes

where $-\alpha cot(\theta)$ is also known as the skew coefficient $s$ in many places. This results in a calibration matrix that has the familiar form that we see in Matlab and other books too.

Note that Matlab states the skew parameter as equivalent to $+\alpha cot(\theta)$. This sign change is because the origin is in the top left corner and the $y$ axis increases as we go down7.

Should you care about axis skew?

Whew, that was a lot of work! You might be relieved to know that you don’t have to consider the axis skew for most modern cameras because the axes of modern CCD cameras are usually at $90^\circ$ with respect to each other.

Here’s an excerpt from the section “Camera Intrinsics” on page 46 of the book Computer Vision Algorithms and Applications by Richard Szeliski.

Note that we ignore here the possibility of skew between the two axes on the image plane, since solid-state manufacturing techniques render this negligible.

And here are excerpts from the sections “Finite projective camera” and “When is s $\ne$ 0” on pages 143 and 151 respectively of the book Multiple View Geometry in Computer Vision by Richard Hartley and Andrew Zisserman.

The skew parameter will be zero for most normal cameras. However, in certain unusual instances it can take non-zero values.

A true CCD camera has only four internal camera parameters, since generally s = 0. If s $\ne$ 0 then this can be interpreted as a skewing of the pixel elements in the CCD array so that the x- and y- axes are not perpendicular. This is admittedly very unlikely to happen.

In realistic circumstances a non-zero skew might arise as a result of taking an image of an image, for example if a photograph is re-photographed, or a negative is enlarged. Consider enlarging an image taken by a pinhole camera (such as an ordinary film camera) where the axis of the magnifying lens is not perpendicular to the film plane or the enlarged image plane.

In fact, OpenCV8 does away with the skew parameter altogether and its calibration matrix looks like

To sum up, you would need to account for axis skew when calibrating unusual cameras or cameras taking photographs of photographs, else you can happily ignore the skew parameter.

Thanks to automoto for your invaluable review.