Whew! This chapter took much longer to process than I had anticipated. It was mainly because I had to stop every few pages to revisit a concept in linear algebra or probability. So I’m listing out those concepts below in the hope that it will be helpful to anyone attempting this chapter.

Chapter 12 of the book “Introduction to Linear Algebra” by Gilbert Strang is pretty useful for the last three concepts.

Apart from the exercise solutions, there are some notes/proofs that I would like to provide to clarify some of the matter in the text.

The main index for all chapters can be found here.

I. Consider the problem of computing a best line fit to a set of 2D points in the plane using orthogonal regression. Suppose that $N$ points are measured with independent standard deviation of $\sigma$ in each coordinate. What is the expected RMS distance of each point from a fitted line?

The RMS distance of each point from the fitted line is nothing but the RMS residual error of the orthogonal regression estimator.

Following the discussion from Section 4.2.7(p101), we need to define the dimensions of the measurement space and the model to arrive at the answer.

The measurement space clearly consists of all sets of coordinates of $N$ points, N $x$ and N $y$ coordinates, i.e. $\mathbb{R}^{2N}$. The dimension of this space is $2N$.

Using these values in conjunction with result 5.1(p136) we get

Just to be sure (and to generate pretty graphs), I also verified this result experimentally in Octave.

The first graph is just to show you what the best fit line using orthogonal regression would look like for a sample of 2000 points taken from a bivariate normal distribution with zero mean and a standard deviation of 10 in each coordinate.

The second graph shows that the estimated value closely tracks the closed form $\epsilon_{res}$ we just calculated and both of them tend to $\sigma = 10$ as the number of points tend to infinity.

If you’re interested in the Octave/Matlab code for this, I’ve uploaded it over here. 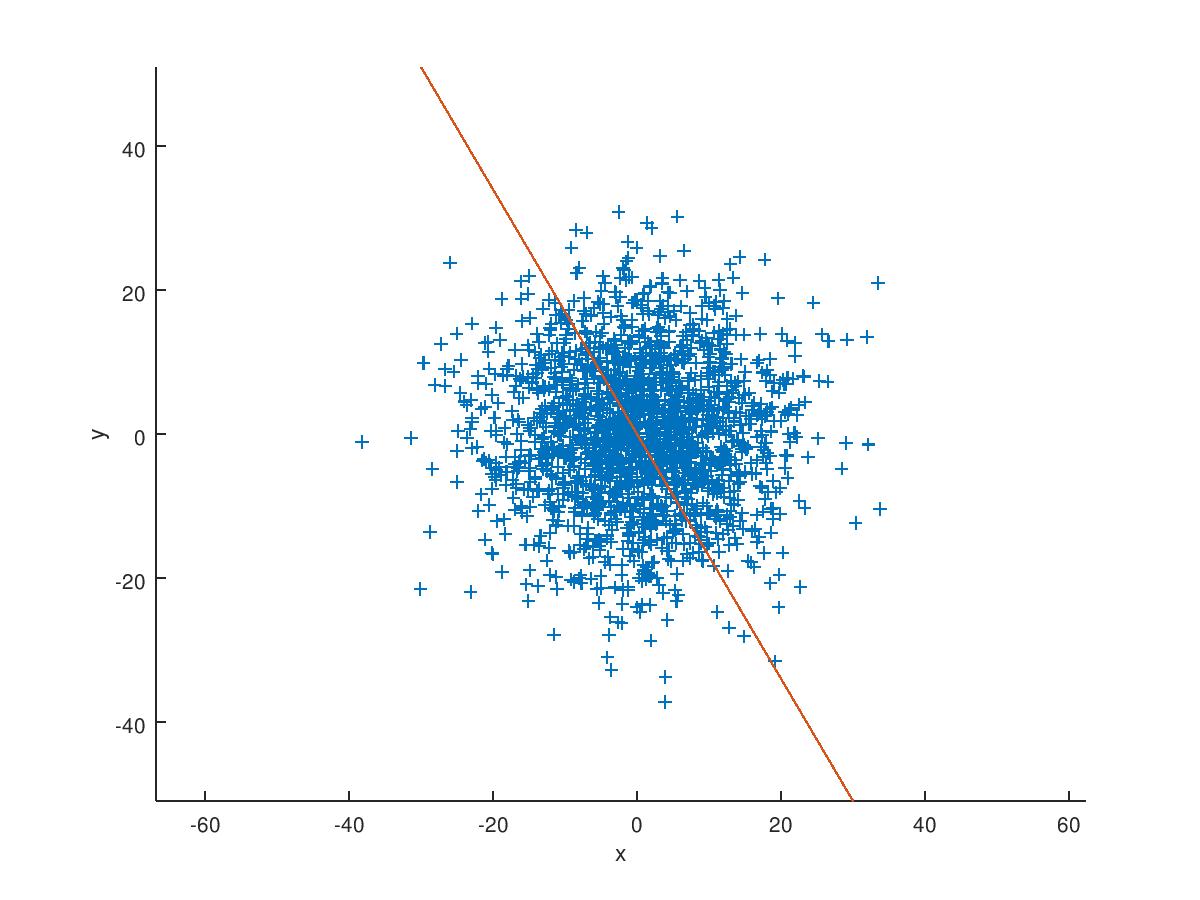 Orthogonal Regression for 2000 points with $\sigma = 10$ in each coordinate

II. In section 18.5.2(p450) a method is given for computing a projective reconstruction from a set of $n + 4$ point correspondences across $m$ views, where 4 of the point correspondences are presumed to be known to be from a plane. Suppose the 4 planar correspondences are known exactly, and the other $n$ image points are measured with 1 pixel error (each coordinate in each image). What is the expected residual error of $\begin{Vmatrix}\textbf{x}_j^i - \hat{P^i}\textbf{X}_j\end{Vmatrix}$?

As this is a problem from a much later section, I do not understand it very well yet and will come back to it later (if I remember to).